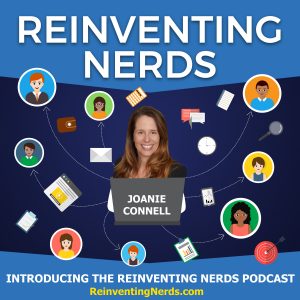 I’m a nerd myself.  But you know what?  I don’t think I’m a whole nerd.  I think I’m about half nerd.  I started out as an electrical engineer in Silicon Valley and, after several years, I decided to go back to graduate school to learn psychology because I wanted to help  engineers and other technical people be better at communicating with each other. It’s been about twenty years now and I love it!  It’s some of my favorite work.

In the Reinventing Nerds podcast, I bring people on who are nerds, and also people who are “people experts.”  For example, there are scientists, engineers, programmers, academics, researchers, doctors–people who are really focused on their technical skills yet have to have those people skills to be successful in their work.  I know it’s hard now.  Everyone wants us to have it all.

Please subscribe to the podcast.  You can also watch us on YouTube and listen to us on iTunes.  Enjoy!