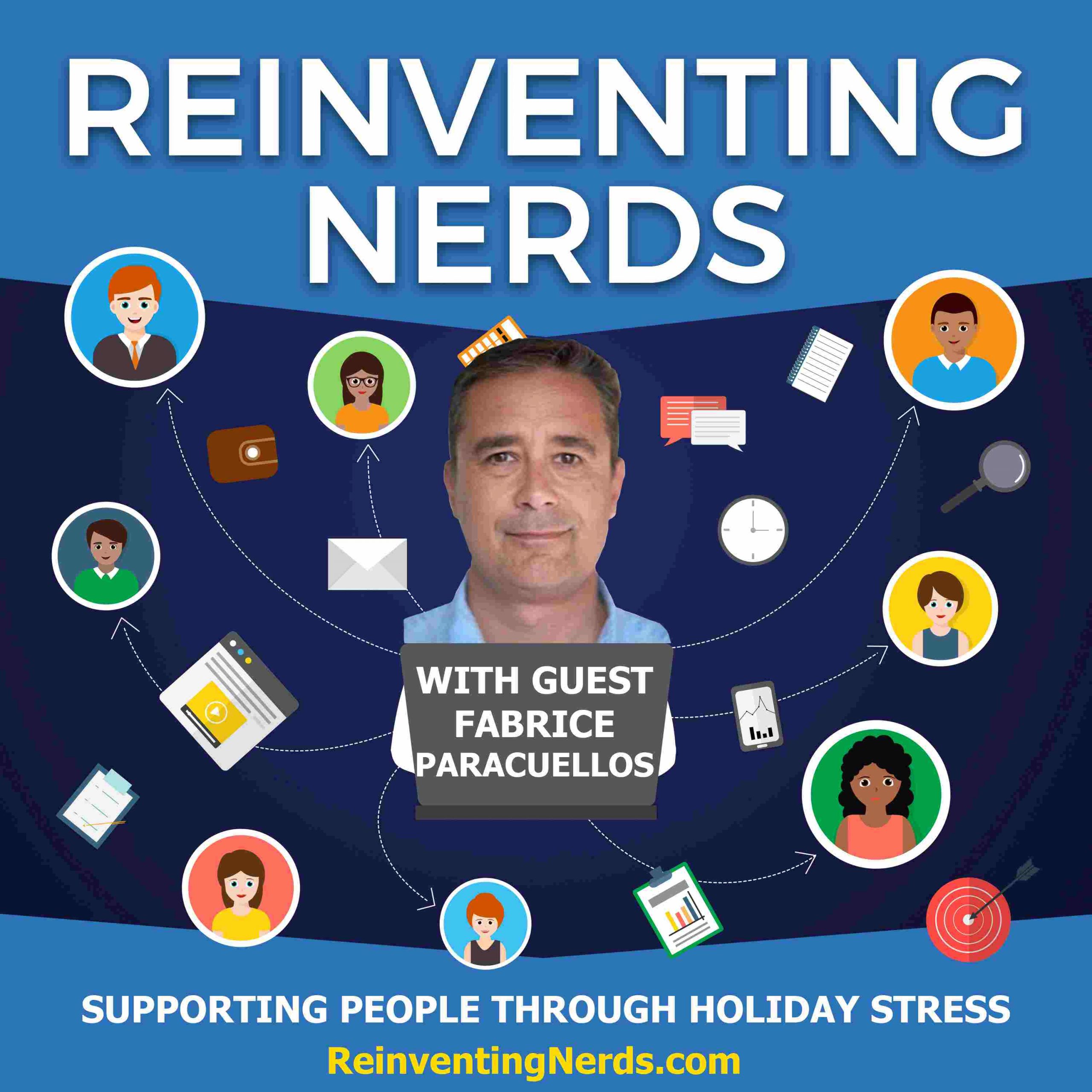 Joanie hosts a special holiday episode with Fabrice Paracuellos. Fabrice is a Licensed Marriage and Family Therapist in the state of California.  He helps individuals, couples, teams, and organizations with emotions, relationships, self-worth, and wellness. In addition, Fabrice has a technical background with multiple degrees in engineering and business and he’s worked for startups and large tech companies. Today, Fabrice talks about how technical leaders can be supportive to others both at work and at home to people who are stressed out or feeling bad during the holiday season.

Q: Tell us about your background, including your international studies and your work, and how you came to become a therapist and specialize in wellness and relationships.

Fabrice received therapy when he was a teen and it was a wonderful experience for him.  He studied math and physics in high school and engineering in college.  He worked in IT for several years. Having a daughter opened his eyes to doing something that was more meaningful to him, and he transitioned to international relations and business.  Later, when he was ready, he trained to become a therapist.

Q: Technical leaders often say that they want to be a good partner or a good manager or a good friend, but they don’t know what to say to someone when that person says they are stressed out about family dynamics during the holidays. Can you help explain what kinds of stressors and emotions that holidays can bring up for people?

Fabrice explains that what’s called for in this situation may not play to the strength of a person who is really good at solving problems, as technical leaders often are. Simply listening and understanding the emotions that the person is experiencing may be all that is needed. Empathizing by acknowledging their stress may also help. He advises a straightforward statement, such as “That sounds very stressful.”

Fabrice has noticed that lots of tech folks, for various reasons, may not have developed a comfort level with emotions. He says that the trick can be to recognize the emotion the person you’re dealing with is experiencing and validating it. He recommends practicing with a good friend.

He also has found that technical leaders are often used to working in an autonomous fashion.  Asking for help may not come naturally. A good friend can be a good place to start.

Listen to the episode to hear more from Frabrice about how to be a better listener, how to offer support at the workplace without getting too personal or intrusive, and how to manage your own emotions and stress during the holidays so you don’t become a tyrant at work.

In lots of situations, what’s called for is not what we’re good at.

Emotions are really logical when you are given the right theory and tools.

Noticing emotions is a form of data collection.

Emotions usually have valuable information in them that eventually need attending. 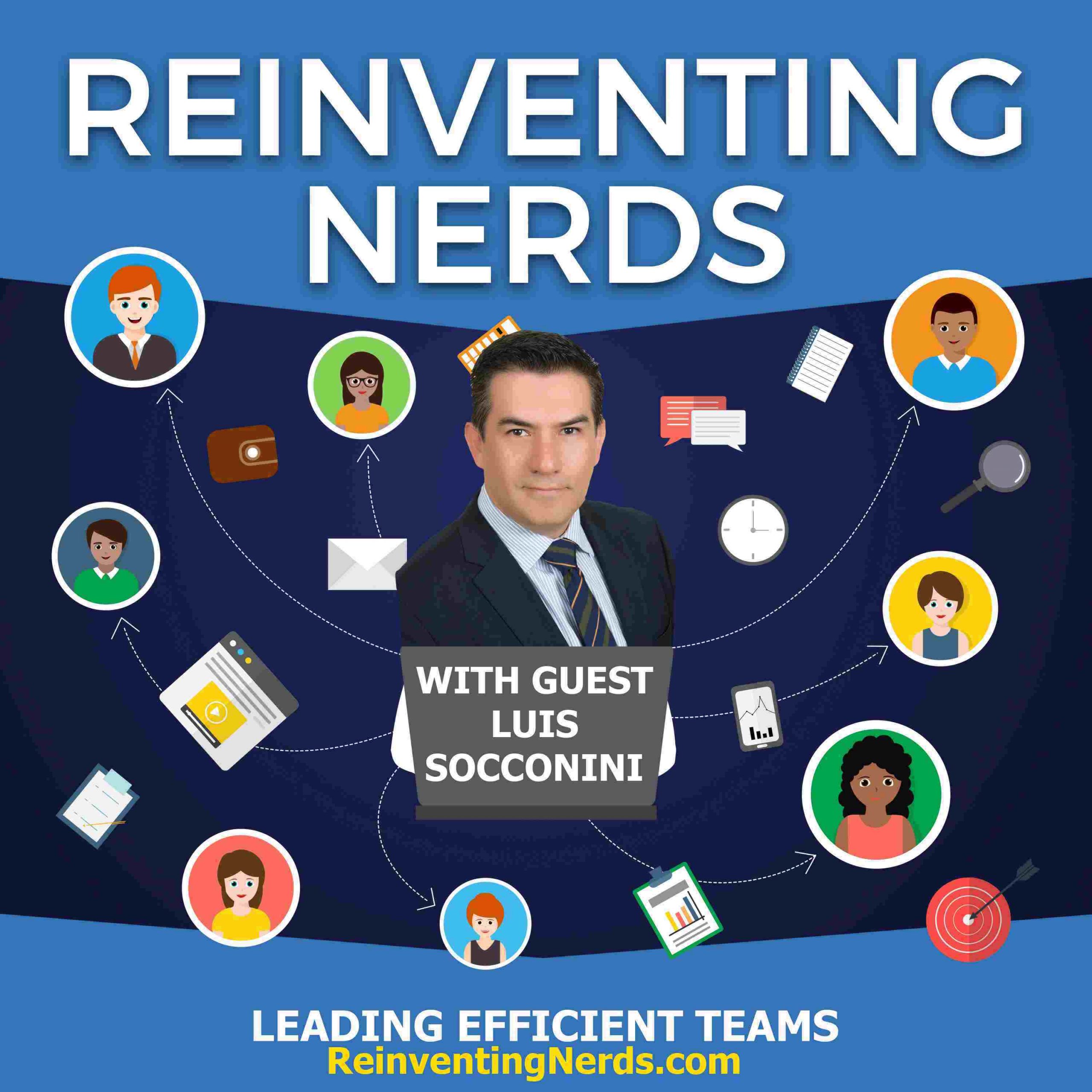 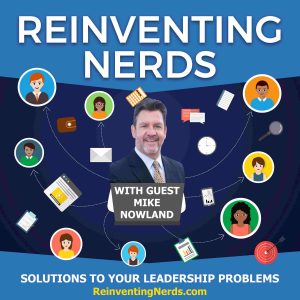 Joanie interviews Mike Nowland, whose purpose in life is to help managers be better, do better, and live better. Joanie met Mike when he was working as the Corporate Training Manager for the Americas at ResMed. Now he’s the president of Enriched Learning and Development, LLC. Mike shares tips for technical people who move into leadership roles.

Q: What kind of nerd are you?

“I’m probably the least technically proficient person you’re going to meet, at least on this podcast.  Numbers and I have been enemies since middle school.”

Q: What did you do at ResMed?

“ResMed was smart enough to keep me away from the medical devices and let me focus on the leadership aspects of leadership and development.  There, we improved the health of people through better sleep.”

Q: What are you doing now?

“If you think about any business.  I don’t care if you’re a heart surgeon or designing a CPAP device or if you’re in the military, you’re dealing with human nature…  It’s a human being business.  If you’ve got people, we’ll work well together.”

Q: What is the difference between managing and leading?

“We have to do both.  In the normal execution of our duties every day, there are things that we manage.  We manage people’s arrival times and departure times, deliverables, performance reviews, and all these processes we manage that execute the performance of the organization.  At the same time, we lead people to understand what stellar performance looks like in this organization, how they contribute to the outcomes in the execution of their duties and how they fit with the outcomes of the organization.”

“Both are important, and both can be taught.”

Q: What kinds of challenges do people who are technically savvy and leadership challenged typically face?

“One is, because they don’t know how to effectively communicate expectations or how to train others in the skills that got them promoted, they almost double down on their workload.  They think: ‘I’m not comfortable training someone on how to do it.  I’m going to do it twice as fast.  I’m going to lead by example.’  Frequently, it’s not developmental for someone on the team.  And, in 3-6 months, they’re burned out.”

To hear all three typical challenges as well as solutions, listen to the episode.

“Most managers are managers today because they were strong individual contributors. It can be very frustrating to make that transition.”

“Other people were probably performing pretty well when you got promoted. You don’t have to do their work for them.”

“When you get promoted, you get a grace period to ease in.”