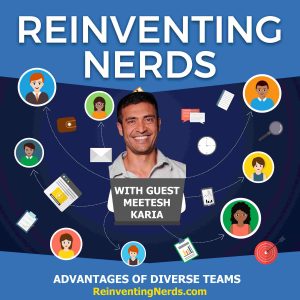 Joanie interviews Meetesh Karia, CTO of The Zebra, the nation’s leading insurance search engine.  Meetesh’s interest in computers goes back to childhood.  He taught himself several programming languages back in the 80s when he was a kid and played on his dad’s 8086 computer.  He studied computer science and math and minored in psychology in college.  Meetesh is first generation Indian American and he grew up understanding and valuing what diverse teams bring to the table.  We talk about how to recruit, hire, and manage diverse people, the unexpected benefits and challenges of diversifying, how to manage people remotely, and how Meetesh grew from managing a handful of people to over a hundred.

Q: Why and how do diverse teams help?

“Let me start by illustrating it with a story.  In early days at The Zebra, when we were designing our first release and we were designing the thing we thought we wanted to use.  We built it and released it.  What we learned through that was that 40% of drivers in Texas drive uninsured and that there are a significant number of them that pay their insurance on prepaid debit cards.  They do that because they pay enough to get legal and then let it lapse and that’s because they are deciding on whether to pay this or their utility bill or their phone bill.  While I didn’t come from significant means, I thankfully was lucky enough to never have to worry about are we legal or do we have lights?  That different perspective never occurred to any of us because we had not lived it.  That’s one example of how and why diversity, in terms of viewpoints, experiences, age, and everything, is critical to building a better company and team.”

Q: I hear a lot of excuses of why people don’t hire for diversity.  What kinds of strategies have you used to attract diverse people?

“It is challenging but it is doable.  I’ll challenge people to do it because it’s worth it.  One of the reasons it’s challenging is that we, as humans, want to be around people who are like us.  That goes to recruiting as well because we tend to subjectively prefer people who are like us.  People applying tend to look at those companies and if the group of people in those companies don’t represent them, then they aren’t as interested.  It is a challenge and it does require being extremely intentional about it.  It doesn’t happen by accident.”

“A while back, our company was all male—thankfully from different backgrounds—and I started thinking that if I don’t find a woman and start the process of making a gender-diverse team, then it will become more and more daunting for a woman to come into a team full of men.  Around that time, I was looking for help with management of the team.  I sought to hire a project manager.  I thought to myself, this is an opportunity for me to remove the requirement to be technical, to widen the top of the funnel, and focus on bringing in a qualified woman to the team.  That, hands down, has been the best hire I’ve made in my entire career.  She went on from being our project manager, to Director of Engineering, and recently, I promoted her to VP of Engineering.”

Q: How did the non-technical project manager end up in such a technical role as VP of Engineering?

“She picked up enough along the way and she’s a phenomenal people leader.  She learned enough along the way to know when to call BS and when to bring in help.  She’s not going to architect the system, but I don’t need that.  I’m the CTO and I have people with strong software engineering skills.  I need someone as VP of Engineering that can drive delivery, that can manage the team, that can grow the team.”

To find out how they widen the funnel, find people from non-traditional sources, and screen them to know they’ll be successful at the job, as well as the unexpected benefits the company experienced, listen to the episode.

“I don’t think we’ve ever made it mandatory to have a college degree.”

“I’m a big believer in the value of periodic face-to-face communication for remote teams.”

“What’s the cost of not diversifying?”